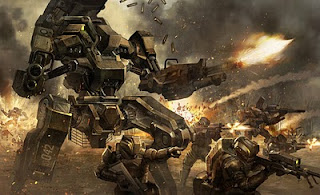 Worked on this over the weekend. It's just about finished. (Actually, since the subject matter is all there and the idea reads well enough; I guess the concept is complete... but as an illustration, its only 85% there. I have a few areas that are currently offending my artistic senses and will address them within the next few days).

And before you judge me... I KNOW THE PERSPECTIVE IS WACKY!! yeh, yeh; polishing a turd. My mistake was that I focused on the mech too early on in developement... then later decided to expand the canvass and put more elements of interest in it. That meant my composition took a hit and so did the perspective. The ground plane was an afterthought. Lesson learned.

I have saved my files along the way and will post the various stages of development so u can see my thought process. (coming soon)
Posted by Eliott at 1:46 AM