So, a while back I had this idea about two bad ass robots, tearing shit up and just doing what badass robots do. This was the start of that idea: 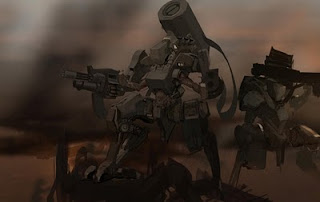 I had to put it down for a few weeks, and when I came back, I looked at the image, still feeling strong about it's intentions and goals, but felt scale was needed to ground the image to realism. After adding a few soldiers for support and possible narrative I ended up with this: (note... this would have been the best time to address the retarded perspective issues... whoops). 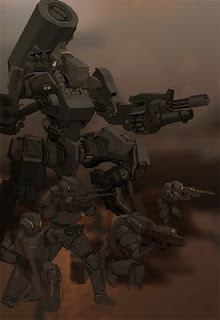 This image was always about the Mech, so that would be my main focus. The problem with that vertical composition was that the mech 1. has to get scaled down in size and 2. seemed whimpy and less of the focus. Using "big against small" as my rule, I began rearanging the composition to get the mech large and in your muther f*ckin face. The only problem that created, was that becasue this mech was supposed to be 2 and a half times human height (from its feet to the ammo drum on its back), there was no easy wat to show everything I wanted in the scene (unless I zoomed out). I could show the ground troops standig next to the legs of the mech, or the upper torso of the mech, but only the soldiers heads. The dirty solution there was to fudge it to make the shot work. Whatever.

I found a bolder composition that worked for me, slapped down a photo I grabbed off the internet(a screenshot of Farcry 2, I think) and used it as my color base. It doesn't matter what photo is used really, its just to get color that works. 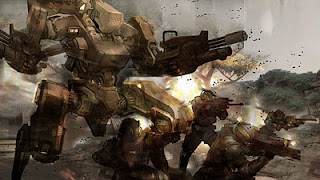 As I was filling in the spaces, I was still struggling with the composition. Not happy with my dirty little compromise, I tried another approach. Zooming out a bit, puting more of the mech in the image I began developing my horizon line and atmosphere. In my opinion however, that only severd to show that my composition was foreground heavy with no middle or background elements. Great. So basically, after cursing myself for being soo lazy, I decided to accept the prison I created and embrace the suck. 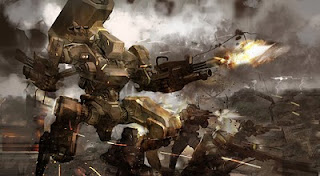 I met the two compositions in the middle, shrinking the mech slightly to allow more to be shown, but remain as the focus of the image. I began defining the shapes more clearly, getting some textures on the mech and establishing the light source, etc. From that Far Cry photo , I got the idea to have an explosion going off in the distance, causing a bright hot spot on the leg of the mech and soldier standing next to it. 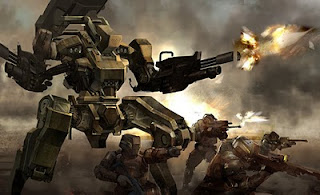 Next thing I know, I'm drawing exploding vehicles, other mechs walking in formation behind the lead mech, foot soldiers running off in the distance, etc. What the hell?! This was supposed to be about ONE MECH! 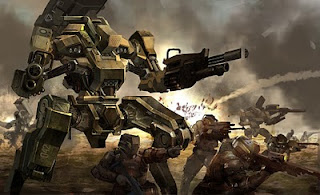 Added atmosphere to push/ pull foreground and background elements. Fixed the second arm, added lighting, a treeline, and smoke trails. whoot! Some of the action elements in the scene really started working together and it was all comming along nicely. There were several times when my girlfriend laughed at me making "pew, pew pew, kabooom, barakakakakakaka" sounds while I was drawing. To which I replied "mechs are no laughing matter; they will f*cking kill you!" 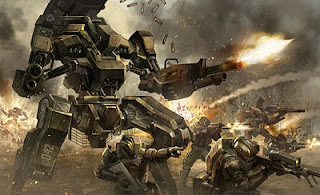 I darkend the overall image a bit for added ommph. Made small tweaks here and there, looking at the image as a whole; figuring what works and what doesn't. 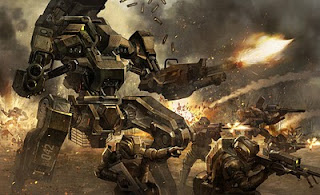 I decided that some of the sparks and flying debris in the scene were too distracting, so I shrunk it in size and knocked it back a bit. I went on to alter the gun arm slightly, punched up the light sources, smoothed out a few edges, changed the color of the sky to a bluere hue and gave the mech a bit of battle damage. horray.


And there you have it. A quick and honest look at how this image came together. While I think the intent of this image definately comes accross, the narration is hindered by not having a solid sense of perspective and scale, nor a good understanding of where this battle is taking place. lesson learned. (but its still pretty damn cool in my opinion. hehe)
Posted by Eliott at 10:39 PM