Here's a very quick glimpse of how I tackled the CGMA Mech challenge.  (Well, the big steps, anyway—I may go further in depth at a later date).  I figure its worth sharing in case anyone wants to see my thought process.

When the challenge came around, the requirements were to design a mech capable of leading an army of machines into battle - and eradicating every giant monster that got in it's way.  Another criteria was that the design of the mech had to reflect the function it was called out to do (e.g. it should have a lot of ammunition, a good defense system, etc.).

With that in mind, I flipped through my sketchbook to see if there was any unfinished ideas that fit the criteria, and I found this: 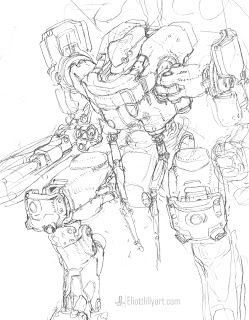 It was a good start, but I would have to modify it to fit the assignment criteria (especially that; "its gotta have crazy guns" part.  Scanning and retouching the image in Photoshop, the mech was redesigned with Armageddon in mind.  I outfitted it with a huge dual feed 185mm Auto cannon (to attack the large oversize creatures that roam the landscape), a over-sized meat cleaver made from a single piece of steel and a shoulder fired SWARM missile system.  With utility in mind I gave the smaller arms a rifle to hold (but not permanently attached).  These arms could be used when additional fire power is needed, or if/when supplies are needed to be carried.  It was also important to me that the mech be in motion (not just standing in place). When all was said and done, here's the redesigned sketch: 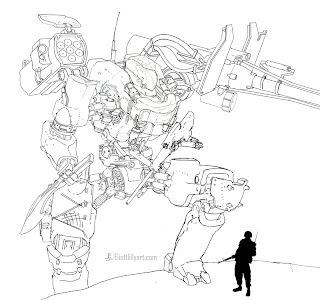 If you noticed the change in the joint attachment points- good eye.  The reasoning behind this (which seemed like a good idea at the time) was to give the entire mech a more "machiney" feel to it and to better demonstrate how they articulated. Looking back I am not sure if that was a good move, since they kinda get lost in the final image.  Coloring came later (that's a whole other discussion). I decided on a sickly mustard yellow and green pallet, since we all know that's what Armageddon looks like... hehe.  Interestingly enough, the guy who won first place had the same color pallet as I did... so i know I was onto something there.  Ultimately, the final result was this: 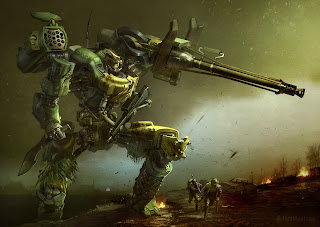 I hope that was informative- or at least interesting to see my raw sketches   Any questions? comments? emotional outbursts?
Posted by Eliott at 8:05 AM