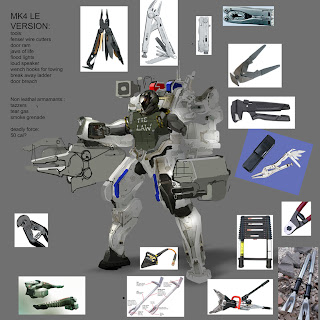 Mmm.. no not really.  I got excited at the idea of an alternate LE version.. but as I sat down to think about how this would work and what tools and weapons it would need, it became clear to me that a police version would not be too practical.
At first I thought it could be deployed instead of SWAT, but the suit is  not designed for close quarters combat.  Its larger size and width would make it difficult to walk through doors and turn around in confined spaces.  OH and do i need to remind you what happened to ED 209 in the stair well... yeh. not good.
So then I thought about it being used in a crowd control scenario. Outdoors would be its ideal playground,  but you wouldn't use a Gatling gun to quail a bunch of protesters.  (or would you?! hmmm.. JUST KIDDING) At first I replaced the heavy gun with tear gas launchers/ tazer's, emergency tools etc.   But  as I developed my idea I realised that it would still need to carry a lethal weapon as a last line of defense.  So I brought the large gun back.
And that was the problem I couldn't solve.  Because the rules of engagement are different between police and military,  a 20 mm cannon deployed in a civilian environment  would deal too much unwanted collateral damage.  Even a 7.62 fully automatic machine gun would cause more harm than good in these areas.  And as the weapon of choice got smaller and smaller it became a bit ridiculous to see this large machine hold such a small weapon.
So I've put the LE version on hold for now.  Im not saying that  I couldn't design the H.ARM Suit to be able to do these things, rather that in its current state,  the suit has its limitations.  However, there is definitely an idea there worth pursuing, because  I can easily see the benefit of its ability to carry heavy cargo.   And after I have completed the rest of the suits in this series, will prolly go back to figure out the logistics of an LE version.
Posted by Eliott at 9:58 PM