So you wanna draw guns.... (for video games)

Well... guns are tricky! In a first person shooter the gun is the thing that the player will most identify with because it stays with the player throughout the duration of the game. It represents you, (the player) and is the main way to interact with the environment and characters therefore serving as the 'voice of the player. The trick to concepting for video games is to make that voice (your gun) as distinguishable as possible so that you can look at it out of context and immediately place the game it belongs to. This is called a 'Signature weapon and needless to say, is the Unicorn of video games. If designed well signature weapons can be as unforgettable as the characters in the game; no pressure.

SIDE NOTE: It takes more than just a concept to make a signature gun. (Trying not to dive too deep here) basically the gun has to be tuned right by the Design team so it is balanced and handles well. Animation needs to give it cool movements. The Sound dept needs to work its magic while the Effects team perfects the muzzle blast and hit effects that will empower the player etc. When all of these things come together the results is an identifiable and memorable weapon... but it starts with an awesome concept.

Here are examples signature weapons. (If u don't recognise them... well, good luck getting into this business).

1. The Gears of War LANCER. The first time you used the chainsaw you knew you would never forget this gun. The design is very sci-fi... but it has familiar elements to it. (hand grip, vent holes, sighting system..) U can see the barrel and instantly know its a rifle of some sort.

2.Halo (1,3) Assault Rifle. Very sci-fi and stylised also. Has a simple but recognisable shape to it.

3.The plasma cutter from Dead Space.
Another example of unique look and function. It was extremely satisfying to use and if you were up for a challenge you could play the entire game with this weapon alone.


There is no surefire way to make a signature gun. (heck, I'm still learning) but I can tell you that that there are several things that I take into consideration before beginning a gun concept and setting out on my quest to find that unicorn.

THE THINGS I NEED TO KNOW:
1.What type of weapon is this? (pistol, shot gun, sniper/assault/battle riffle, etc)
2.How does the gun work? What are the moving parts? (reload, charging handle, switches etc.)
3.What details are needed to convey this gun successfully?
4.Does it have a distinct shape and feel? Is it aesthetically pleasing?
5.Is this gun believable? (believability is partially relative to the fictional universe the gun resides in, but is also relative to the players expectations of the gun. I'll explain ina bit).

WHAT TYPE OF WEAPON IS THIS? Usually on a project I get a specific task to "concept a shotgun". Design hands me a document with the weapons specifications on it. It will usually state things like: Two handed semi automatic shotgun. Has a magazine that holds 10 rounds. Is meant to be a close range weapon with ballistic drop off after X meters... yaddda yadda yadda. There are usually limitations imposed on me such as: how much real estate the gun takes up. (how much of the gun you seen on screen at once). There is also the problem of precious memory space within the game, so I am told that the shotgun will have to be held like an assault rifle. What this means is that in first person (your character) will hold and grip the shotgun and assault riffle in the same way. Therefore I have to draw the grips of the weapons in the identical spot which, at times, can be somewhat of a challenge. Once that has been established however, I am left to play with the overall design. Will it be a sleek and lightweight weapon or a heavier beefy gun? I set my goal but am not afraid to explore unexpected variations.

HOW DOES THE GUN WORK? Good question; learn your shit! Understanding how guns function/ disassemble, what their moving parts are etc. will go a long way to enhancing the guns believability and THAT is crucial when developing a signature firearm. On my free time I spend countless hours staring at guns (seriously... u can ask my girlfriend) and have a workable knowledge of guns and their function. Moving parts on guns is always cool. Animators, given the time, love to make things... animate. It is important to have the gun workings figured out in my head before I pass the assignment along. I need to know: how does the gun reload, where is the mag release button, is there a bolt handle, etc. I identify the moving parts of my concept and flag them for the animation department. (Because the animators will ask, and I need to have an answer for them).

WHAT DETAILS ARE NEEDED TO CONVEY THIS GUN SUCCESSFULLY? A shotgun will always have to look and feel like a shotgun! (no matter how sci-fi it is). And that is because there are certain expectations that a player is accustomed to when handling a shotgun in video games. They expect it to look like a shot gun and perform like one.
In order to look like a shot gun the artist needs to have an understating of what elements makes a shotgun different from other guns and infuse these elements into the concept. A good concept will convince the player that it is a shotgun at first glance. If u are basing your design on a real world weapon then it has to look like it is from this world... if it is an alien space cannon that ACTS like a shotgun... then it is NOT a shotgun: its an an alien space cannon that acts like a shotgun!

THIS IS A SPAS 12 SHOTGUN. It is a real world weapon.

This is the ISA M13 Semi-automatic Combat Shotgun from Killzone.
THIS IS A SHOTGUN that reads as such right away.

The Flak Cannon from Unreal Tournament 3.
THIS IS NOT A SHOTGUN... but it acts like one. When fired the projectiles spread out over distance and suffer from ballistic drop.


If I find that my concept is looking more and more sci-fi while my goal is to maintain a real world principle, then I will try to reel it in by adding modern and familiar aspects. Giving the weapon a pump handle, a foldable stock or even shells that load beneath the gun is a good start. I notice that the most popular way to affix a sci-fi gun to reality seems to be giving the weapon double barrels (either side by side, or one on top of the other).

The Gnasher Shotgun from Gears of War 1, 2
It's short stubby frame instantly reads as shotgun. Has double barrels and vent holes. 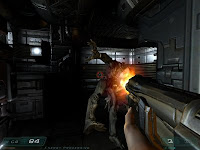 The shotgun in Doom 3 is a thick sci-fi blaster.. but is recognisable as as shotgun because of its pump handle grip.

The shotgun in Halo 1,2,3 is also successful because it too has a sci-fi feel, but retains several real world elements. ( pump handle grip, shells that load from below the gun, lit iron sights, etc.).

That being said, there ARE some exceptions where games can establish a signature weapon without that weapon being accurate to its real world counterpart. The Unreal 3 Flak Cannon is a perfect example of a weapon that doesn't resemble a shot gun at all, but is unmistakable as an Unreal weapon. But in my opinon the gun fails becasue if a player has never played Unreal,he will not know what to expect from that weapon just by looking at it. My experience has taught me that having a distinct and easily identifiable weapon is the strongest way to get the player to pick up the weapon durring the heat of battle. Its the classic case of "Crap I'm getting shot at from this dude right behind me... do I wanna experiment with this alien gun on the floor and take my chances??..." vs. "Crap I'm getting shot at from this dude right behind me.. ohh, there's a shotgun...YESS!!"

DOES IT HAVE A DISTINCT SHAPE AND FEEL? IS IT ATHEISTICALLY PLEASING?
Creating a signature weapon usually means the artist will need to have a good design language. Angles need to play off one another, be aware of aggressive shapes and bold design. I usually start by doing simple black and white thumbnails to get the basic shape of the gun. If the silhouette is strong at the thumbnail stage, then it will work larger. In video games, silhouettes are very important because they offer the player the first impression of a weapon. Therefore the silhouette of a shotgun MUST read as a shotgun when it is laying on the floor five feet away from the player. (This is why it is so important to have familiar elements interlaced into the gun design). In general, when I design an entire armory of guns, I try to give each weapon type a distinct feel and shape so that the player can distinguish the weapon the enemy is carrying. Even if the weapons are made by the same fictitious manufacturer there needs to be some cohesive unity between them, but at the same time they need to feel distinct enough not to get confused. Vary the thickness of the weapon, it's overall shape and length... but keep the design languages between them unified. (Same color scheme, same decals, same styling).
After the black and whites, I mock it up larger and start filling in the details. (I reference real world guns to put that BELIEVABILITY in there!).

IS THIS GUN BELIEVABLE?
At this point.. if I have followed my recipe, there should be no question about the nature of the weapon. (but I'll usually call someone over to my desk and ask them what they think it is...) If my colleague doesn't recognise the gun as I have intended it, then I have failed as a person and condemn myself to low mumbling and swears... but then I make it better.

DISCLAIMER:
These are just my thoughts that I have affirmed through my daily experience... I'm not so steadfast in my ways to be proven wrong, I am always open to learn a new way of thinking.


OTHER THINGS I'VE LEARNED. (Don't ask me why, just take my word for it!!!).
When designing a gun for a video game, curves are usually bad.
Never put circles or expensive geo out of frame or covered up by a hand grip (unless there is a chance it will be viewed at some point. (like during a reload).
If you draw in first person perspective, ALWAYS GET A BLOCK-IN that is accurate to the games Field of View (FOV).
Always put details towards the camera where player will be looking. (the back of the gun).
From concept to modeling, something ALWAYS gets lost in translation... your gun on screen may be 5-15% less sexy than concepted. (and that's' with a damn good modeler).
It doesn't count until it's running in the game!
It's not personal... just do it over.
and my personal favorite "we want THAT... but different"
Posted by Eliott at 10:41 PM