Of all of the concepts generated while I worked on F.E.A.R. 3, I am most proud of the weapons. (Well, those and the one mech I did). Here are a few examples of the standard weapons:
Uzi
Sniper rifle 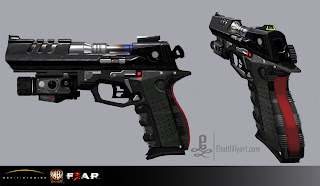 The Combat Auto Shotgun  was designed basically like a P90... but with shotgun shells.  The animators rigged it so badass, that you could see the shells roll down the magazine and into the breach.  When fired on full auto, this was incredibly satisfying.  Sadly, as the game developed and the weapon was changed to semi automatic, the magic of watching the shells disappear down the mag was lost. 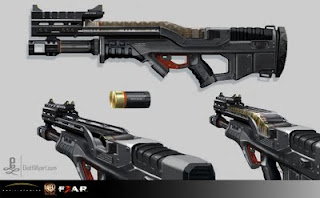 At one point, to present a cohesive package, we even tried matching the gun to the soldiers uniform. note:  the soldier in this image was done by my buddy (and at the time, co-worker), Grant Hiller.  you can check out more of his stuff here: http://artjunkiefix.blogspot.com/ 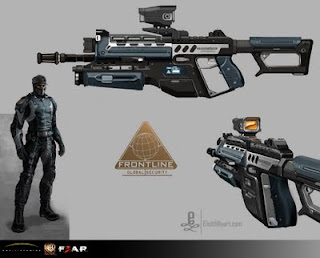 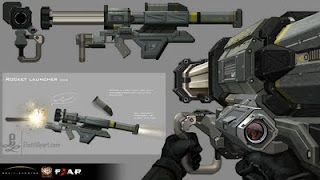 This was an early attempt at a Flechette gun (later renamed the Penetrator). It shot out a high volume of pointy spikes in a buckshot manner. Real nasty when used up close.
This is the rework of the same gun, but done later in the project. I think there is a drastic difference in quality from some of the earlier guns to the later ones.  The more weapons I concepted, the more comfortable I became at making them and ventured out into unknown territory.  Here's an example of a fully realised concept.  It shows the Penetrator in side, front and first person view.  To add to the lore of the gun I fabricated a little blurb describing the guns purpose, ammo type and firing/ reload sequence. 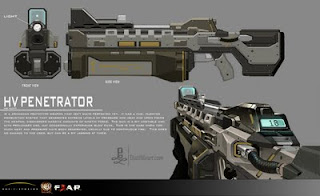 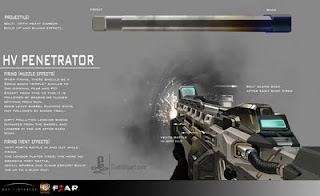 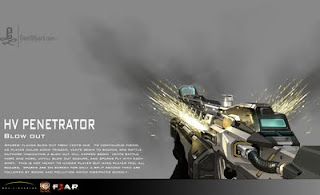 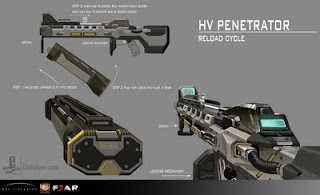 And last but not least, the mech.  It's the first mech I ever made.. so don't judge too harshly.:P).