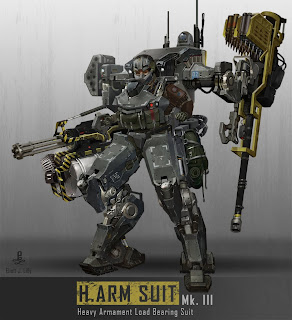 A quick write up for shitz and giggles.

The H.ARM suit is a robotic load-bearing exoskeleton designed to be a force multiplier on the battlefield. It extends the arsenal of any grunt war fighter by allowing its wearer the ability to operate and deliver heavy munitions into any theater of operation. Because of its relatively small size it is not only lighter, "quieter", and more energy efficient than most mechas, but it offers major advantages to war fighters in confined urban areas.

Because it is mission adaptable, the H.ARM suit can be outfitted with various weapons and attachments. Its current loadout is:


Will be posting more mech goodness soon. Stay tuned....
Posted by Eliott at 1:26 AM